The Fed in focus

The jobs outlook may weaken as the year progresses

Global growth will moderate in the second half of 2019

A noticeable downward shift in the world’s largest economies

Trade issues continue in the spotlight

These probabilistic return assumptions depend on current market conditions and, as such, may change over time.

IMPORTANT: The projections and other information generated by the Vanguard Capital Markets Model regarding the likelihood of various investment outcomes are hypothetical in nature, do not reflect actual investment results, and are not guarantees of future results. Distribution of return outcomes from the VCMM are derived from 10,000 simulations for each modeled asset class. Simulations are as of March 31, 2019.

Results from the model may vary with each use and over time. 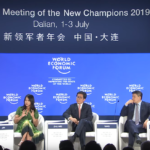 What will cause the next Recession-Robert Shiller CNBC